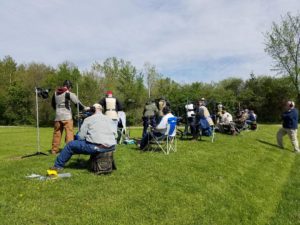 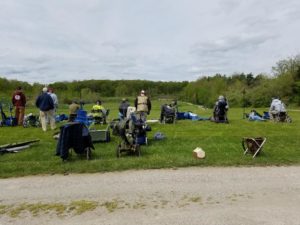 300-Yards Looking Downrange. Look at all of the targets!

Mark Saturday, May 11th, as a day when the High Power shooters finally got a break from the weatherman!  At 8:30 when we called shooters to the line for the safety briefing, it was clear and sunny!  The temperature was a bit brisk, but what little wind there was came from the east and stayed at our backs for the entire match.  If anyone had to put on more than minute or so of wind from their no-wind zero, I would be surprised.  We had bright sun and some clouds during the day, but overall it was a good day to shoot.

Twenty one (21) shooters showed up for the match, the largest group since at least the 2017 season.  Thanks to everyone who came out for the day.  The first shot went downrange at 8:57 and the final “Cease Fire” was at 2:12.  Again, congratulations to the shooters for a well disciplined and smooth running match.

At the end of the day, results were as follows:

Weather permitting, we will start Thursday High Power practice on Thursday, May 15th.  Our next High Power match will be Saturday,  June 8th.  Maybe we’ll get another good weather day!

Well, this year’s Work Day was pretty well a wash out, so a group of us gathered today, Tuesday May 7th, to have a High Power Work morning.  We started about 9:00 and managed to get a pretty good list of things accomplished:

Gave all of the weeds on the place a really good dose of weed killer; “Die weeds, die!”

The wet weather has really slowed everyone down in getting the range ready for the 2019 season, but we’re getting there a day at a time.  Thanks to Mike Habel, Mark Richards, Jess Jessup, Mike and Glenna Grannis and Gary (Weed Killer) Walker for their help today.