Work Day was scheduled for Saturday, April 20th ‘way back in December – long before we could have had a weather forecast.  It was a dark, cloudy, cold day and the High Power Director was accused of scheduling the event since it looked like the kind of day for a lot of the High Power matches last year.  Let it be clear to everyone …  it was not his fault (this time).

But, in spite of a steady drizzle and an occasional downpour, about 12 or 15 folks showed up to try to do what could be done under shelter.

Jim Sweeney and a crew worked in the Wiedeman building to get tractors and mowers ready for the summer.

Denny McNabb and the carpentry crew readied some new target supports.  Denny also cut a lot of fresh 24 x 24 target backers out of the scrap cardboard that had accumulated.

A group including Gary Walker and Bruce Bunting spent time working in the pistol bays.

John Halter put on his rain gear and trimmed up brush and downed trees along the north property line.

Several folks helped Larry Beardsley hold a good cleanup in the Clubhouse.  The pile of cardboard and trash in the corner had started to look like a paper recycling warehouse and had turned into a mouse condo. The windows and sills had become well speckled with spider poop.  The rainy day gave us an opportunity to get a good Spring cleaning done in there. 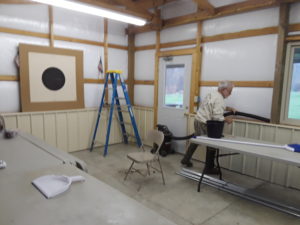 Snuffling out the dead spiders, sawdust and gunk

No, we didn’t get any real outdoor work done, but we have stuff ready to be put in place when the weather breaks. 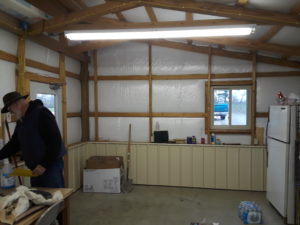 Thanks to everyone who came out – I know I didn’t mention everyone by name – it’s just old age and failing memory, not any intent to ignore anyone. 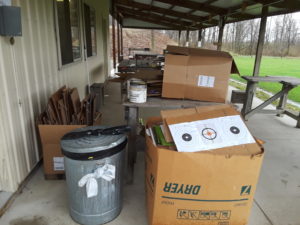 These three boxes are the scrap cardboard and trash we cleaned out of the corner. We’ll burn them some dry day. We no longer have a dumpster, so take your trash home if you would, please.  If not, put it in the cans on the covered firing lines.  If the cans are full, take out the liner and put in a fresh one. We try to keep a new liner tied to the lid of the can.  If not – there is a box of liners under the light switch in the Clubhouse. (Carry the old bag home with you, don’t leave it sitting for someone else).

Since we have plenty of cardboard to make new backers, if your backer is shot up – take it back home.  Don’t stick it in the box “Just in case somebody else wants it”.  That’s how we end up with a box of trash. 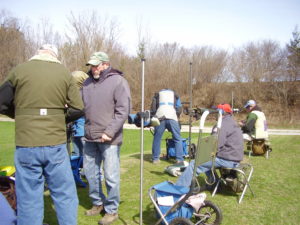 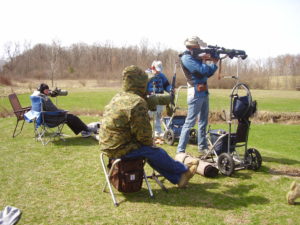 Saturday, April 13th dawned clear and rain free –unusual conditions for a High Power Match of late.  The down side; there was a brisk westerly wind most of the day that made eyes water, noses drip and cheeks chap.  But, I never heard the usual shooter’s cry; “I can’t feel my fingers!”  High Power shooters can complain about most weather – so on the whole it was a nice day for an April Match.

Twenty shooters came to the line at 9:00 – a very good turn out for a first match.  And, it looked like a first match.  We had at least three folks with rifle problems and three of the four Motorola radio batteries died. (I thought those batteries were only a couple of years old, but when I opened the back of the radios it turns out I last replaced them in May of 2012.  Time flies when we’re having fun.)

We finished up about 2:45.  Thanks to all who came out to shoot – and again a great big THANK YOU to Glenna and Mike Grannis for being our Stat Office people.

Oh, by the way – does anyone have a blank Wailing Wall score sheet? The NRA quit printing them about 2011 and we used the last one Saturday.

Work Day is Saturday, 20 April and the next match is May 11th.  See you then.

The Lima Sabers Shooting Association has a number of members who come over to FWRR to shoot matches with us.  We are affiliated clubs, which means that Sabers shoot with us for member fee rates and FWRR members shoot at Lima for their member fee rates.

Since the Sabers shoot on the first Saturday, they don’t compete with our Matches.  Here is their schedule for this summer. 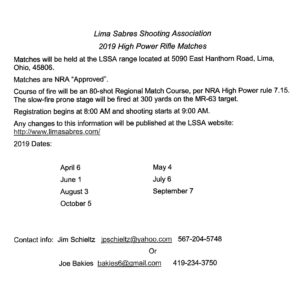 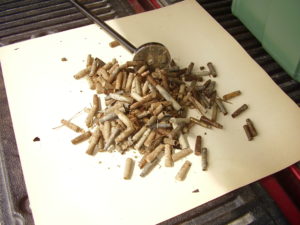 At the close of every stage of a high power match, we hold “Brass Call” when shooters pick up their spent cartridge cases.  Policing up brass reduces litter on the range and also reduces projectile hazards when we cut grass on the range.  Most high power shooters reload their brass and want to salvage as much of it as they can.

Casual shooters are not always as determined as high power shooters in finding their spent cases – especially if those cases are Berdan primed steel cases that cannot be reloaded or disposable aluminum pistol cases.  During the High Power Clinic I noticed that we were starting to accumulate a lot of steel cases around the firing lines.  I’m lazy, so I went to the hardware store and bought a floor magnet to help me pick up steel cases.

A couple of passes along the firing lines yielded a pretty good pile of cases.  The great majority of the cases are 7.62 X 39 cases; probably from AK and SKS rifles.

We are also accumulating a real pile of .22 rimfire cases along the front edge of the concrete.  A note to rimfire shooters; policing your brass does not mean kicking it off the front of the concrete into the grass or gravel.  We will put a broom and dustpan out on the covered firing points by the clubhouse to assist you in gathering up loose cases rolling around on the deck.

And, since we no longer have a dumpster, please be mindful of your trash.  Bring along a garbage bag to take it home.  We will also try to keep trash can liners in the new white building to use in the cans on the covered firing points.  Let’s take just an extra minute to keep our range clean. 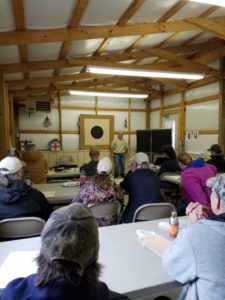 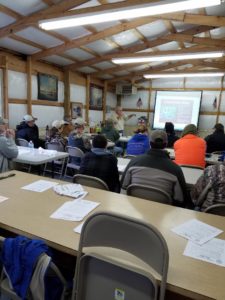 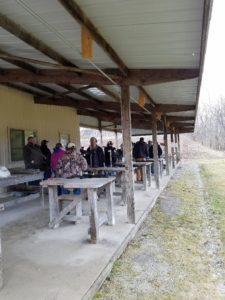 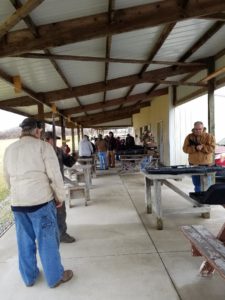 Saturday, March 30 was the day we selected for the High Power Clinic back in December of 2018.  I am amazed at how accurate I have become in predicting a rainy day at least four months in advance.  Saturday dawned, if I can even attempt to use that term, cloudy, rainy and gloomy.

And – to add to the low expectations of the day – the gerstunken heater in the white building would not light off for us Saturday morning.  It had worked Monday, it had worked Wednesday.  It had even worked on Thursday.  But, No –  it – wouldn’t light for us on Saturday morning.  The good news was that it was about 55-degrees outside and after 14 students and a group of helpers gathered for the class, the building warmed up a bit.

After all of this complaining, I was very pleased to see 14 folks show up for the class. The class endured the less than ideal setting and based on the feedback sheets I received, things went better than expected.

About 10:30 or so, we had a very pleasant surprise.  Darrell Fish dropped by, set up his little Coleman one burner heater and whipped up a quick lunch of hot dogs, chips and cookies for the class.  Classroom work ended up about 1:00 and we adjourned to the porch for a shooting session.

Since it was raining, we set up targets at 100-yards. The course of fire was 15  shots from a bench to simulate a slow-prone stage followed by 10 rounds fired as a rapid fire string.  Targets were re-centered and pasted and a 10-shot offhand stage closed out the shooting session.  There were a number of club members present to give hands-on assistance to the students.

It turned out to be a pretty good day after all.  As one student commented; “This beats sitting home and watching it rain”.

I will probably miss thanking someone, but I want to thank Darrell Fish for fixing lunch.  A “Thank You” also goes out to Jim Sweeney, Mike King, Aaron Kohler, Jess Jessup, Mike Grannis and Glenna Grannis for their help with things.

Next on the calendar is the first 50/80 Match of the season on April 13th, barely two weeks from now.  I’ll see you then!