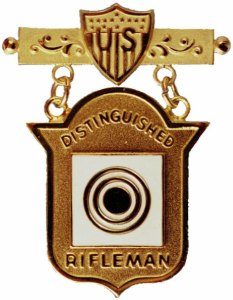 CMP Shooter’s News
June 22, 2019
New Distinguished Shooters. The CMP extends its congratulations to the following competitors for achieving this prestigious status!  The most recent shooters to earn Distinguished Badges are listed below.
Distinguished Riflemen Badge
#2444  Michael King, Fort Wayne, IN

Distinguished Rifleman  Badges are awarded for excellence in marksmanship with authority granted by the U. S. Government and confirmed in 36 USC §40722 [3}. The Badge is awarded for excellence in Service Rifle marksmanship in U. S. competitions governed by the CMP or the individual Armed Services.  The CMP administers the Distinguished Rifleman Badge Program for civilians.  The name of the recipient, the year the badge was earned and the badge serial number are engraved on the badge.

The number of matches in which Non-Distinguished Civilians may compete in any calendar year for EIC points is limited to one National Trophy Individual Match and maximum of five CMP-sanctioned Service Rifle EIC matches. The points from more than five EIC matches in one calendar year will not be counted.

In order for EIC credit points earned in a sanctioned EIC match to be recognized, the match must  be a National Match Course of fire that complies with CMP Competition Rules with at least six eligible Non-Distinguished shooters. The highest scoring 10 percent of all those Non-Distinguished shooters are awarded EIC credit points –  provided that the score fired by the competitor equals or exceeds the EIC Minimum Credit Score, which for Service Rifle is 91%!

a) Highest one-sixth of the top 10 percent: Gold medal or 10 points

b) Next highest two-sixths of top 10 percent: Silver medal or eight points

The CMP awards the Distinguished Rifleman Badge when a Civilian competitor earns 30 or more points and has earned at least one eight or ten-point award.

What does all of this mean in practice?

You can shoot a 465/500, finish third in the match behind a 467 and 469 and if there are only four non-Distinguished shooters in the match, none of you go home with EIC points!

(Points do carry over to the next year, probably the only break a competitor gets in this quest).

To say that this is a hard qualification is an understatement!